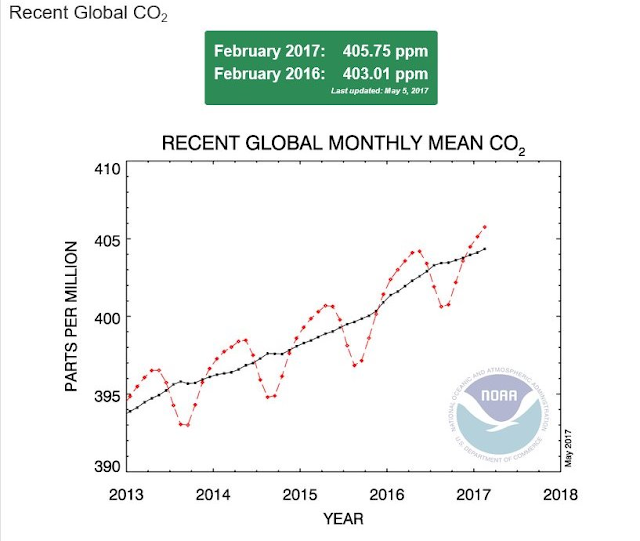 NOAA ESRL calculates the annual CO2 growth trend by averaging the December and January readings to mark the average at the end and beginning of a year. This method is helpful, yet it over and under calculates the growth rate versus actual annual mean for each entire year. This results in significant differences between this approach and the actual annual mean for any year compared to prior years.

This graphic illustrates that difference and how significant it is for 2016. In the following graph, the blue line represents the annual growth rate as depicted on the NOAA ESRL Global Monthly Mean Carbon Dioxide page: https://www.esrl.noaa.gov/gmd/ccgg/trends/global.html

The red line represents the actual annual growth means for each full year. 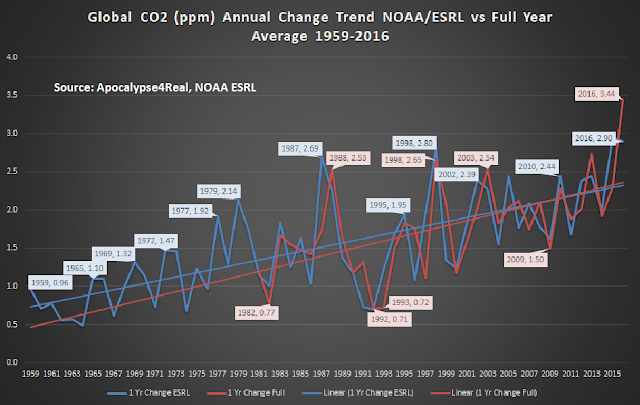 While the current NOAA ESRL methodology results in an annual growth of 2.90 ppm over 2015, the actual annual mean data comparing all of 2016 to 2015, results in a whopping 3.44 ppm increase. Both numbers will change as more samples are added and validated, but it is likely the actual annual mean 2016 CO2 growth rate will remain well above a 3 ppm increase for the first time in modern history.

This continues the atmospheric CO2 increase trend observed since the first readings in March, 1958 at Mauna Loa, (MLO) Hawaii. Using the March, 1958 MLO monthly mean as a global proxy, CO2 has increased 90.04 ppm or 28.53%. 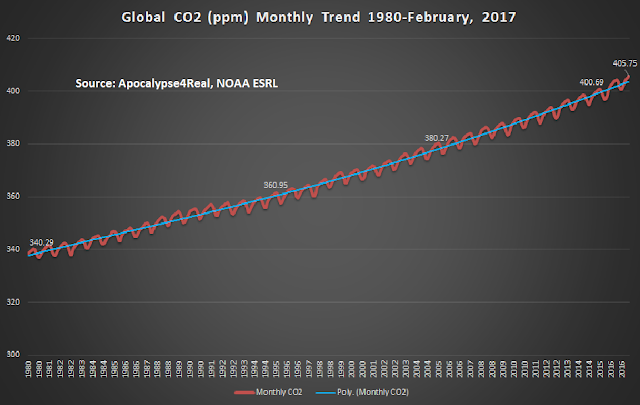 What is less apparent in this depiction is the CO2 increase acceleration since 1958. If we consider the MLO and global mean CO2 record combined, we are achieving 10 ppm "milestone" increases with worrisome acceleration.

The one, five and 10 year Global CO2 Monthly Mean Increase 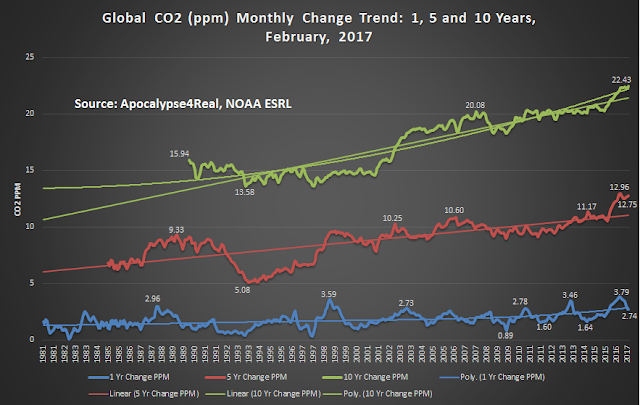 Time Required to Reach Five and 10 ppm "Milestone" is Shortening

However, if one considers how quickly we achieve milestones of either 5 or 10 ppm increases in global CO2, the trends towards shorter times to reach each is apparent and concerning.

Moreover, from 1995 to 2017, we have observed an increase of 10 ppm about every 60 months or five years. However this rate has accelerated through time. Currently we are on track to conservatively increase global CO2 from 400 to 410 ppm in 48 months - four years or less. More on potential future increases later. 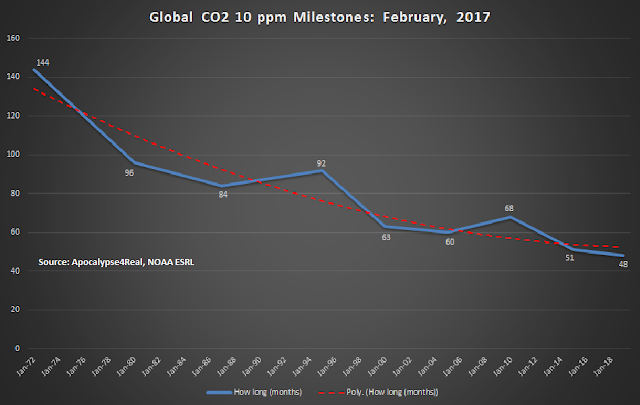 What is of real concern is that since 1995, every increase of 5 ppm has taken less that 36 months - three years. The last increase in 5 ppm, from  400 to 405 ppm, took only 22 months. That is the shortest time for any global monthly mean 5 ppm increase.

With this acceleration, even with allowance for the slowdown in CO2 increases after an El Nino effect has ended, one can conservatively estimate that we will hit 410 ppm by March, 2019, only 48 months since blowing through 400 ppm. Some trace gas monitoring stations have already measured readings well above 410 ppm in the Arctic, and MLO has had daily readings above 410 ppm this year for the first time. 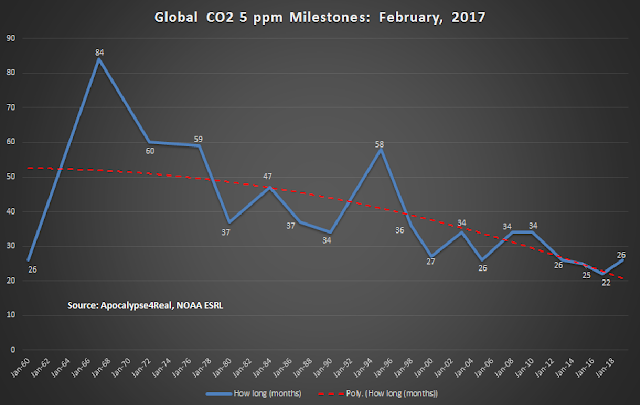 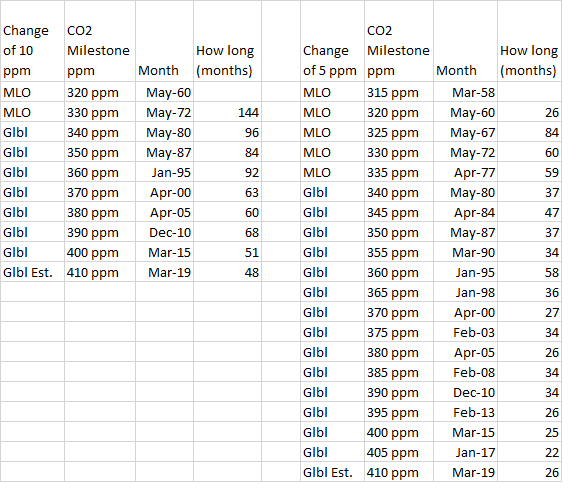 What Have We Gotten Ourselves Into?

After looking at how we continue to experience accelerating global CO2 monthly means, and how we are shortening the time frames to achieve each one, here is a simple set of hypothetical projections based upon various rates of hitting future 10 ppm milestones.

The first (left table) assumes a return to a lower rate of increase, a 60 month, or five year time frame for each 10 ppm "milestone".

The second (middle table) captures the current rate we seem to be moving towards, a 10 ppm increase every  48 months, or four years.

However, the change of 2016 from 2015 was a rate that would see us meet a 10 ppm increase every 36 months or so, about every three years. The right table depicts that rate of change.

These are like making a choice between poisons for our global community, slow or fast acting. 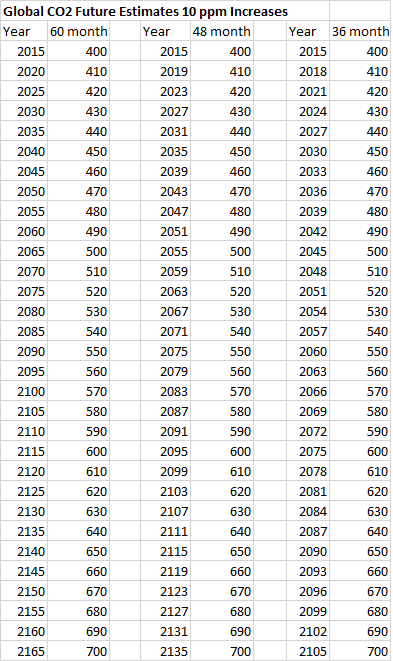 If we continue to experience CO2 increases from human sources and natural feed backs, and drop to a 36 month time frame for each 10 ppm increase, we hit 560 ppm by 2063.

This is what is at stake for the future generations, a warmer and more at risk world. Perhaps we should not call these "milestones" but "millstones."

The real problem? This is only CO2. The real picture for all trace gases has us way beyond the Paris Agreement today. That is for a future post.
Posted by Apocalypse4Real at 11:02 AM