With a potentially strong El Nino in a developmental stage, it seemed time to create a global drought update before this event possibly started to impact the planet. 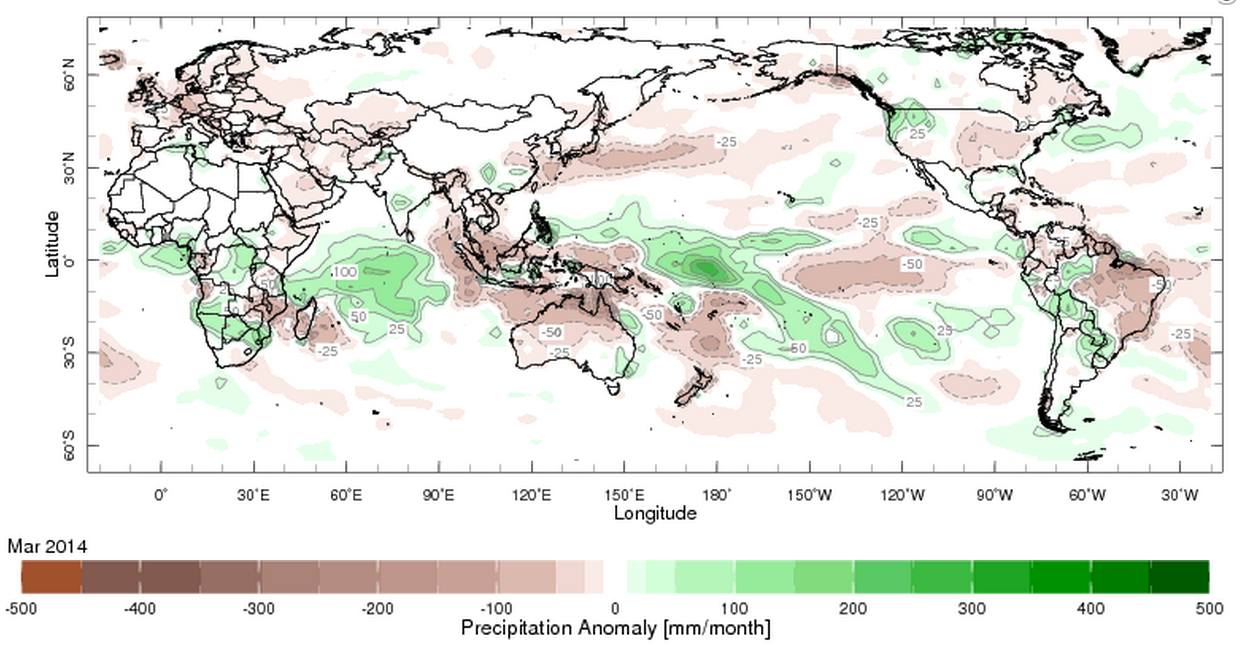 This lack of precipitation was reflected in the global drought levels, which corresponded with the areas lacking moisture. In some areas, such as portions of central and southern Africa, there was an drought improvement in the last 30 days. The maps below depict the precipitation anomaly for March 6-April 4, 2014 and the drought severity for March, 2014.

As noted above, the areas in the mustard color have received less than 33 percent of normal precipitation in the last 30 days. Major areas of Central and Eastern Europe are not getting the precip needed for spring crop planting. The drought severity for the last 30 days is highlighted in the next image for March, 2014, from the Global Drought Monitor. 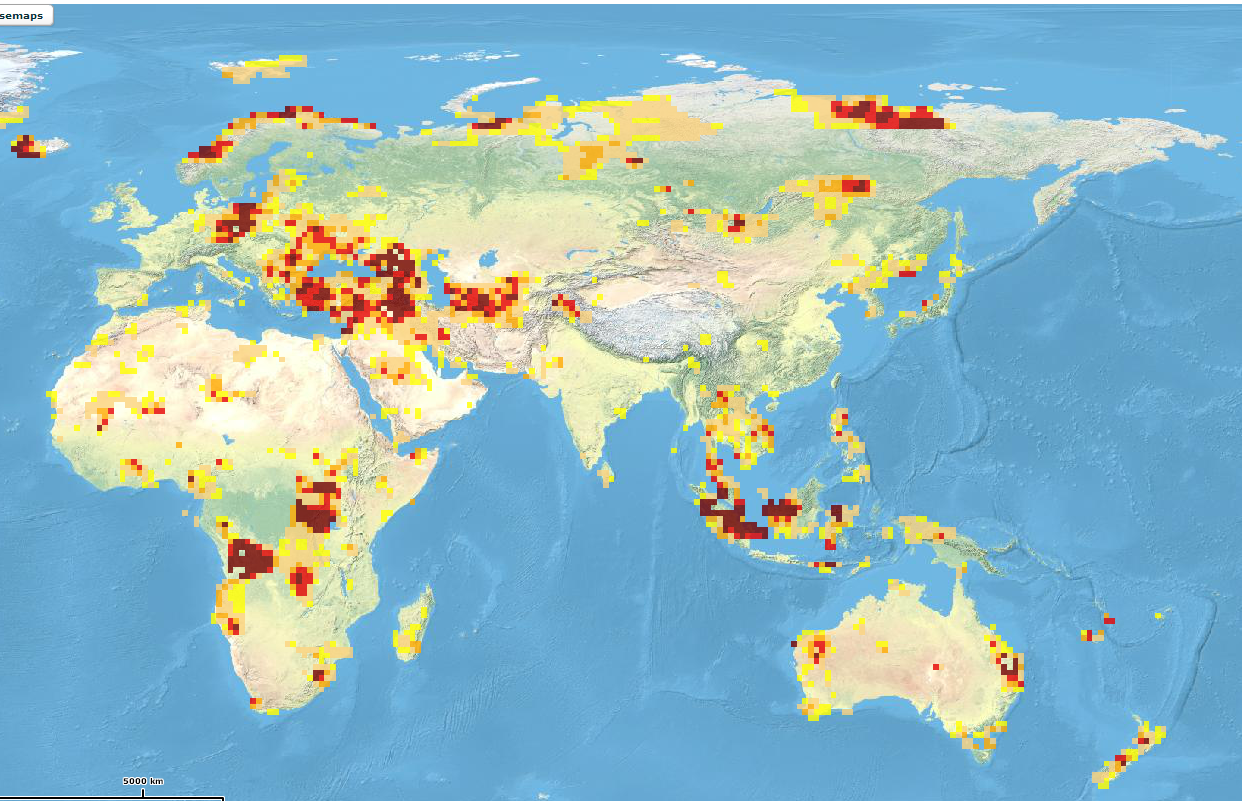 The Middle East drought conditions have been of great concern in Turkey, Iraq and Iran, plus have contributed to soil dryness in Ukraine and Russia ahead of spring planting. Also of note the drought areas in Southern Siberian Russia, which have contributed to the early beginning of the Russian forest fire season. More on these impacts are below. The America's drought levels have improved in some areas but are still of real concern. 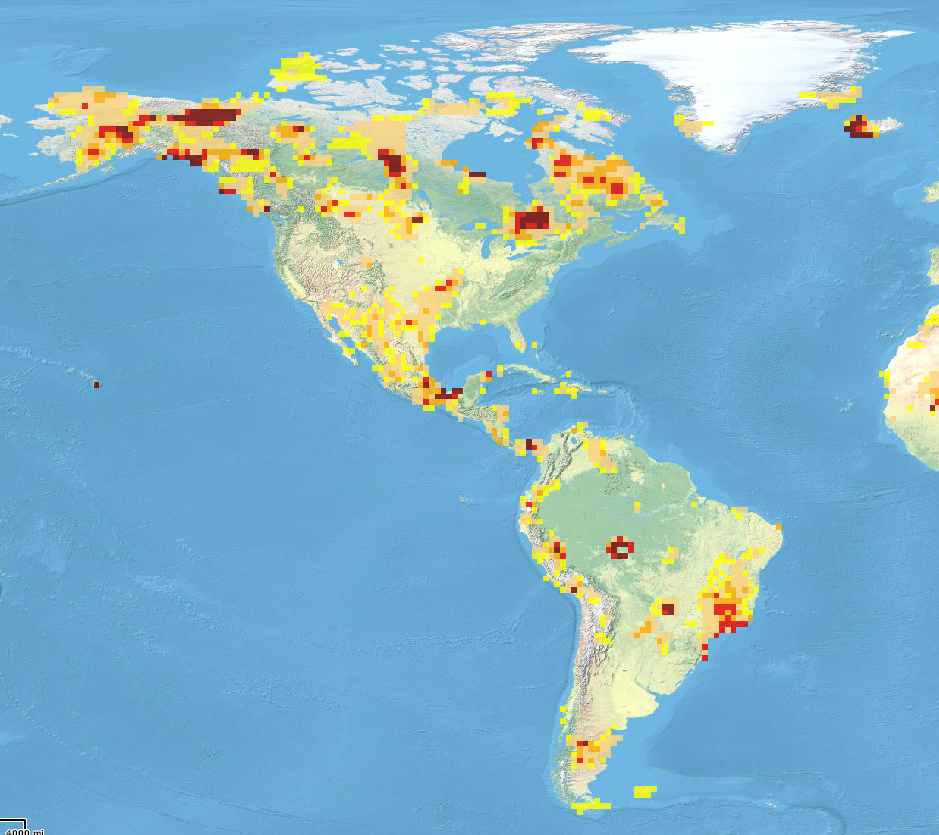 The Americas reveal a significant precipitation shortfall in the last 30 days in Alaska and Northern Canada, which may be contributors to an early fire season in the Arctic, given that snow melt may occur early and quickly, if the temperatures increase rapidly in April and May. Of greater concern to the US has been the continuing drought in the Southwest and Midwest, as will be more apparent in the longer drought time frames to follow. The Midwestern drought is having an impact on cattle production and wheat farming in the Southern Plains. However, the Northwestern U.S. experienced improved precipitation which lowered its drought intensity.

Global precipitation in the last 90 days has left major global areas in significant drought. The CPC precipitation, as a percent of normal, captures the drought severity in the last 3 months that affected Brazil and the Central United States. However the seasonal drought in Central and Eastern Europe and Russia is concerning as well, given the increase in fire danger, and agricultural impacts in crop-producing areas as we move into Spring planting season.

The IRI precipitation anomaly depicts these shortfalls including in the ocean areas, and given its tighter anomaly measurement, it reveals more areas of dryness, than the image above, especially across the Middle East and South America. 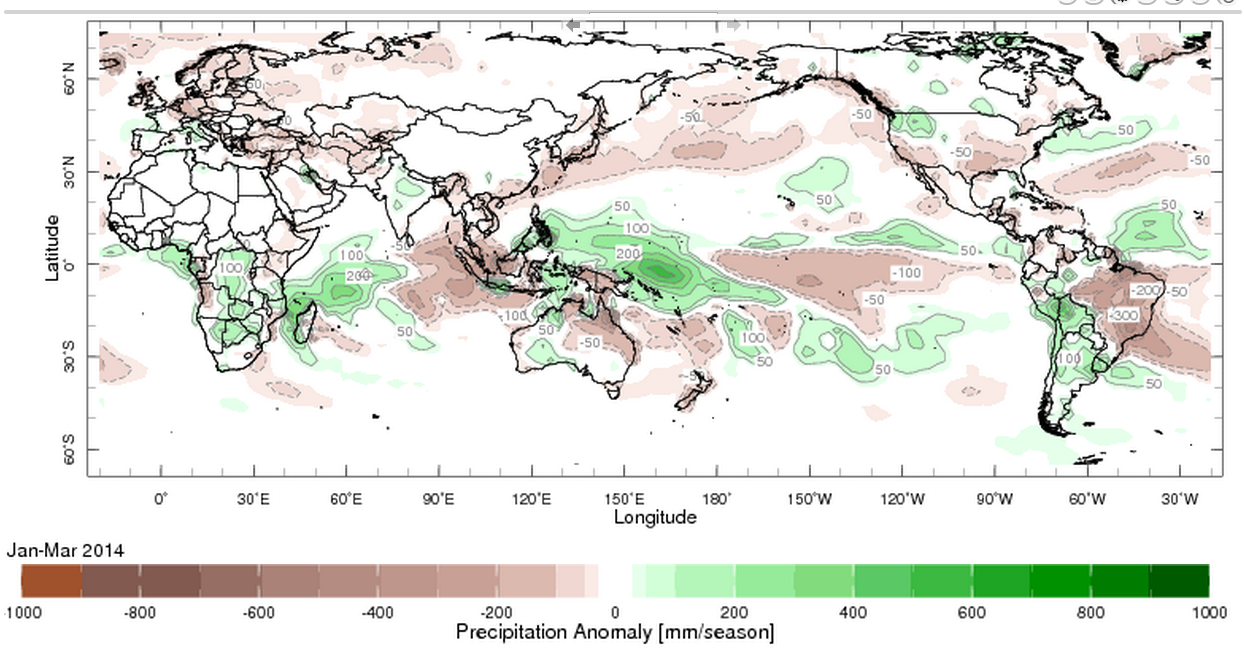 The 90 day global drought image reveals how tenacious the drought has been across Central Europe and the Middle East, from January to March, 2014. The deep drought in Africa has also been a contributing factor to crop failure in Sudan, and the present conflicts in South Sudan. The Chinese and Siberian droughts are also precursers to water shortages in some areas of Southeast Asia and the early Russian fire season. More on that to follow. 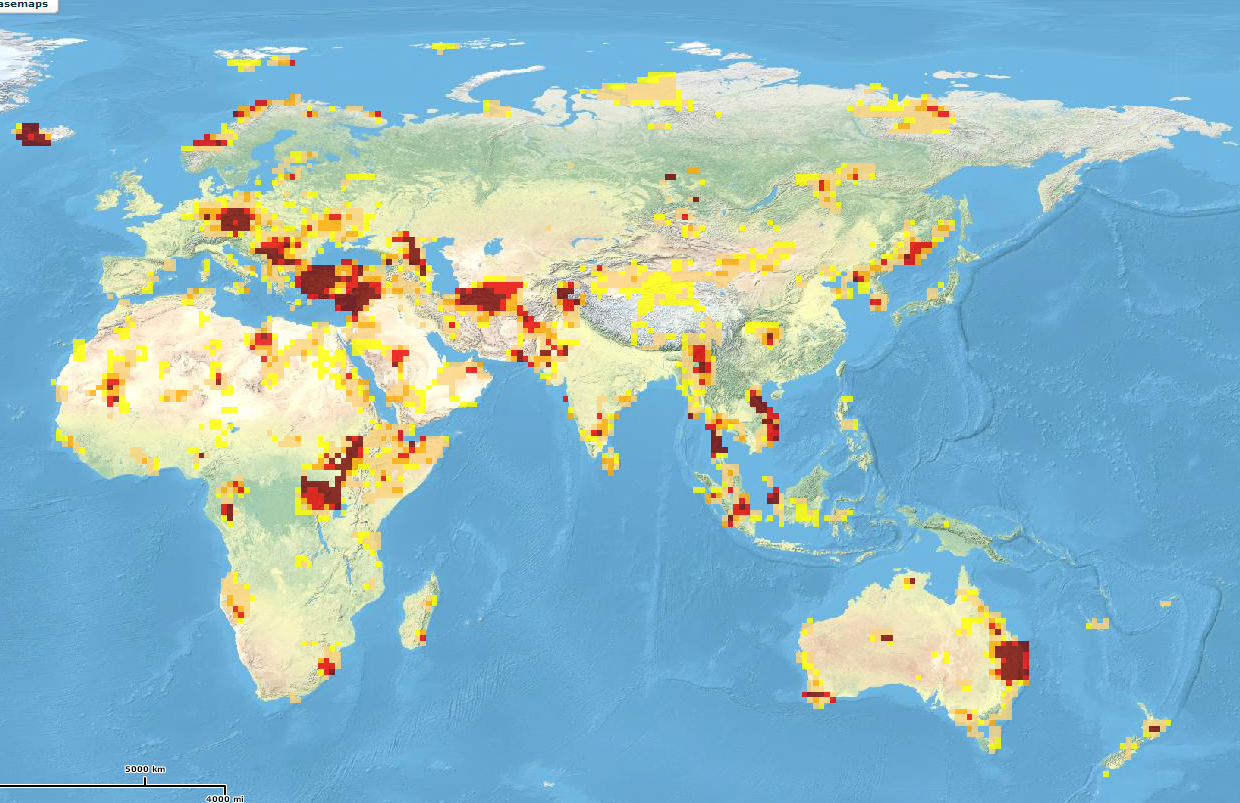 In the Americas, the 90 day drought images shows how severe the Arctic and Brazilian droughts have been. Also, the US areas suffering longer term drought, such as the Southwest and Texas are more apparent. 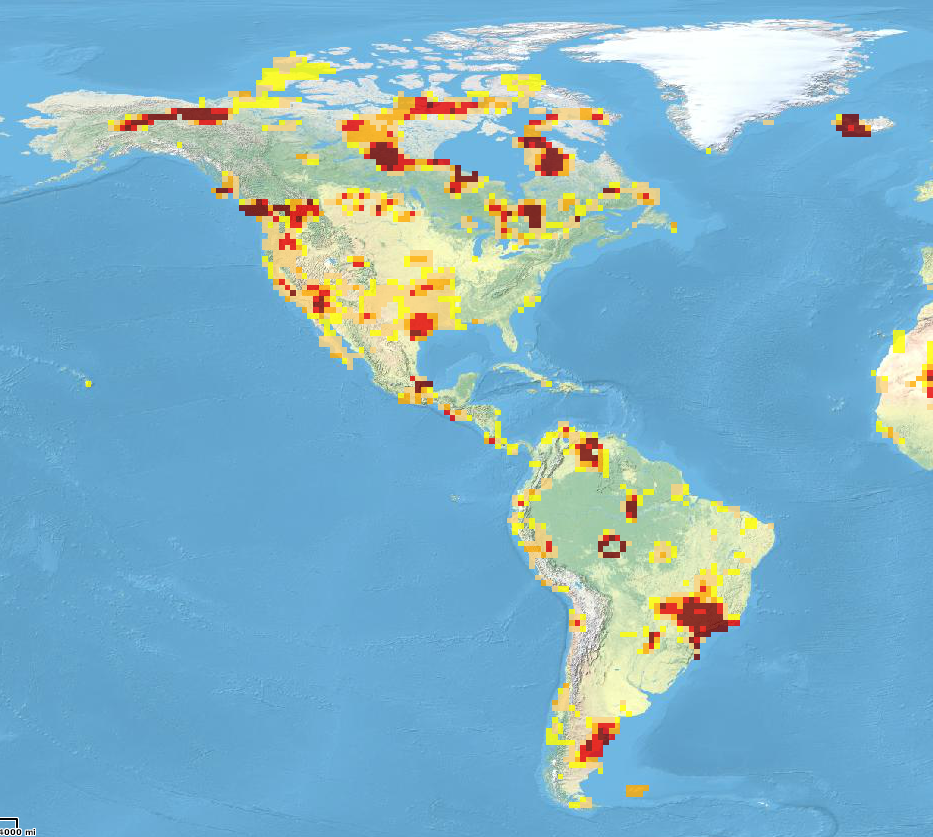 The 180 day global drought impacts are apparent on the CPC percent of normal precipitation anomaly imagery. The length of the drought in Central and Eastern Europe and into Turkey is very apparent and of real concern to the major Turkish population areas and farming this summer. Similarly, the droughts in Brazil and the Midwestern U.S. become clearer, and their impacts on soil moisture and Spring planting season in the U.S. is more worrisome.

This longer term severity is obvious in Australia, and is a result of its record heat this Austral summer. Equally brutal is the drought in the Middle East and North African areas, which impacts planting and harvest in some African areas. 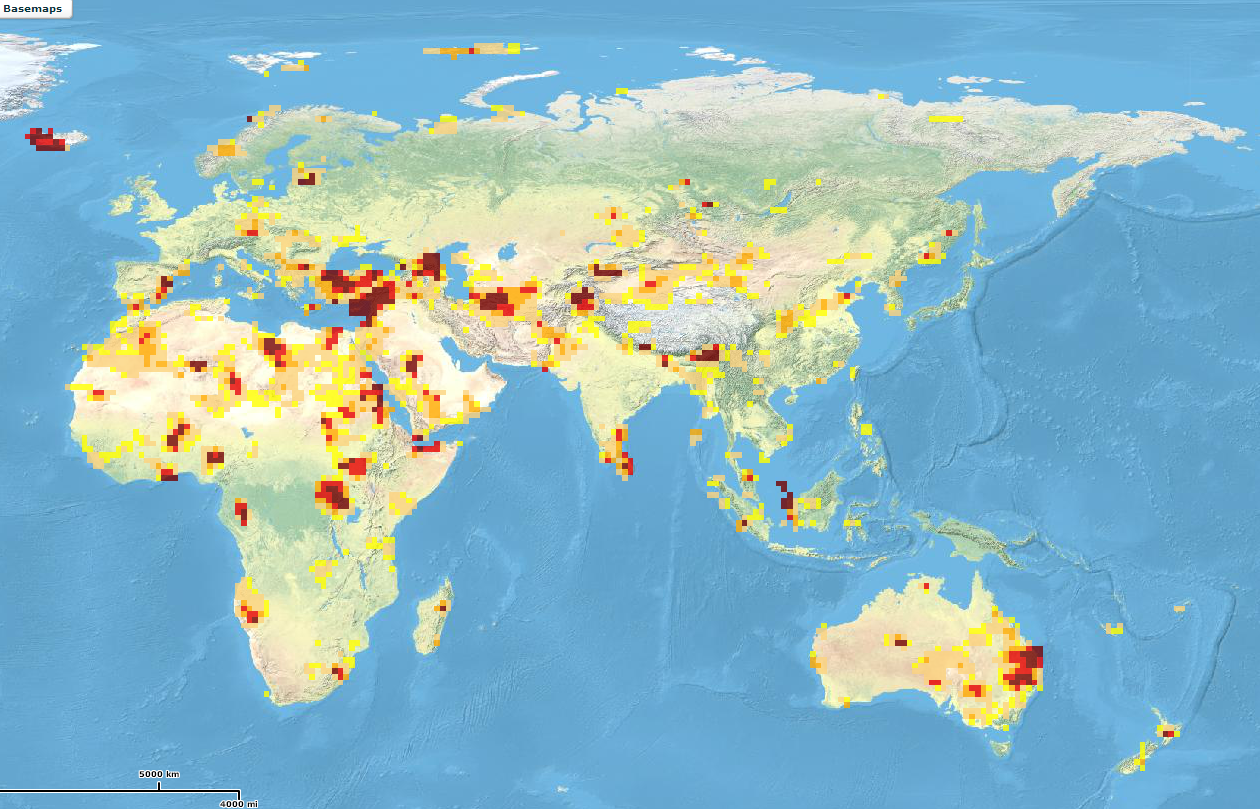 The severity of the 6 month snow drought in the North American Arctic is stunning in the images, which shows that even if precipitation has improved in the Canadian Arctic in the last couple of months this winter, it dies not make up for the longer deficit, which will be a contributor to the Arctic fire season this year. 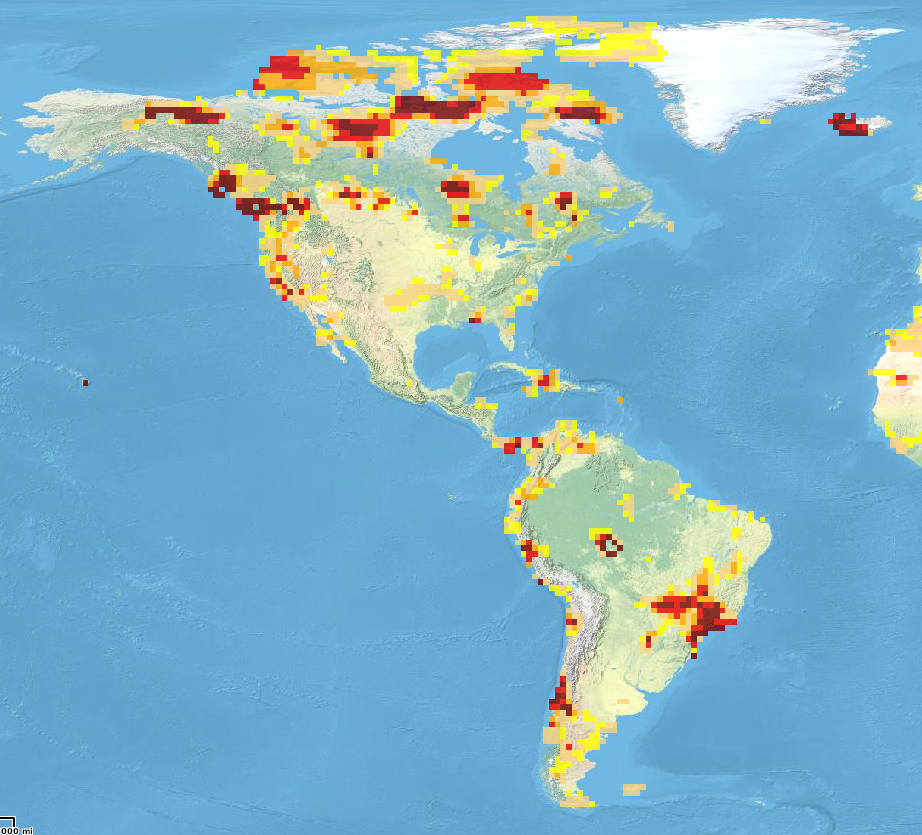 Some global areas have been in drought for the last year. The CPC percent of normal precipitation depicts these difficult circumstances. Much of Central, Northern and Eastern Europe have struggled with drought for the last year. The gash of drought through Central Africa has been a contributor to crop failure in Central Africa in 2013 and early 2014 rains have been erratic. A similar situation has been true for large areas of South America as well, impacting Brazil and Venezuela.

These shortfalls mirror the areas of year-long drought severity in the Middle East, Africa and Asia, from April 2013-end of March, 2014. Some key reservoirs in Turkey and Iraq have not recovered in the past year. Iran's drought situation is becoming a long term concern, with lakes drying up in some areas. The government has already announced tha tit will need to import a major portion of its wheat demand this year. The areas in Australia, which have suffered long-term drought are also facing a coming El Nino which will only make their situation more dire. 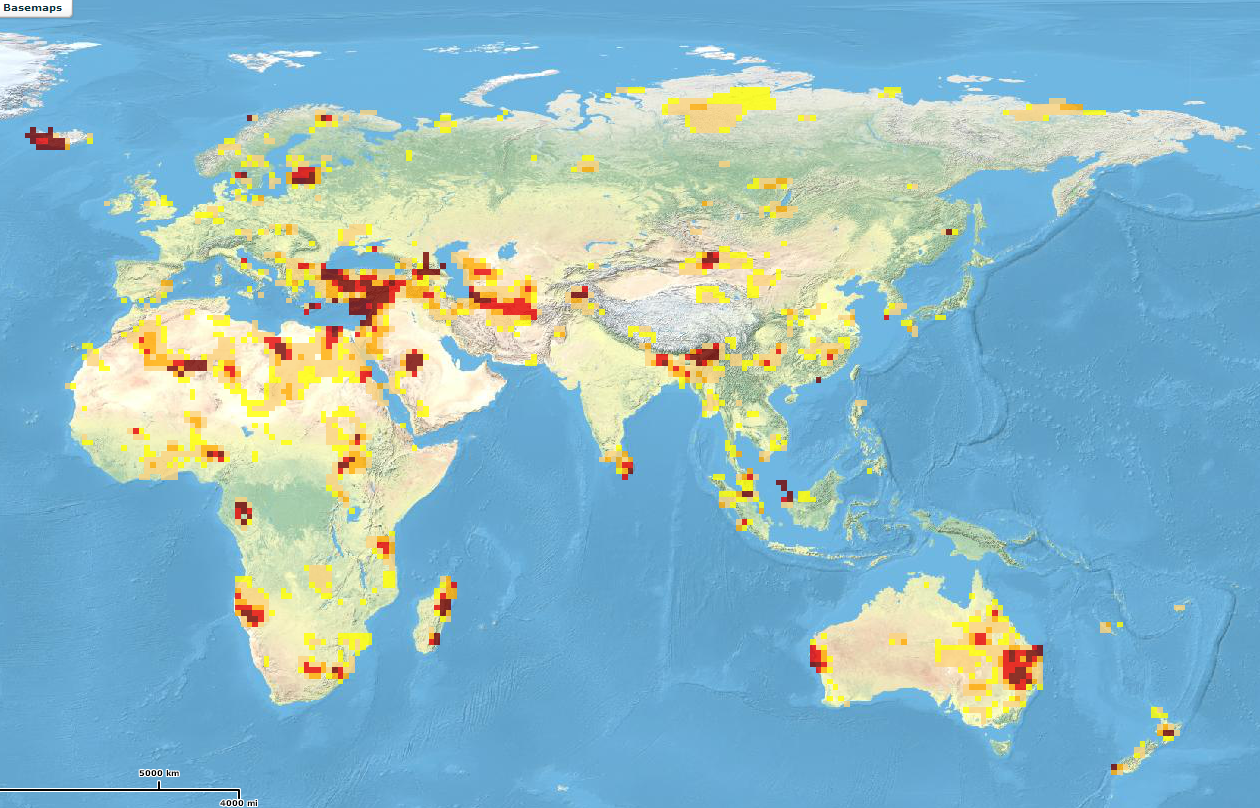 Some parts of the Americas have also contended with year-long drought. The Canadian Arctic seems ripe for more tree loss and permafrost melt this season, with little moisture in place to prevent CO2 emissions from fires. The drought in the Western US is heightened in this long term perspective. Determining whether El Nino may offset or deepen the drought in the Western US remains to be seen. 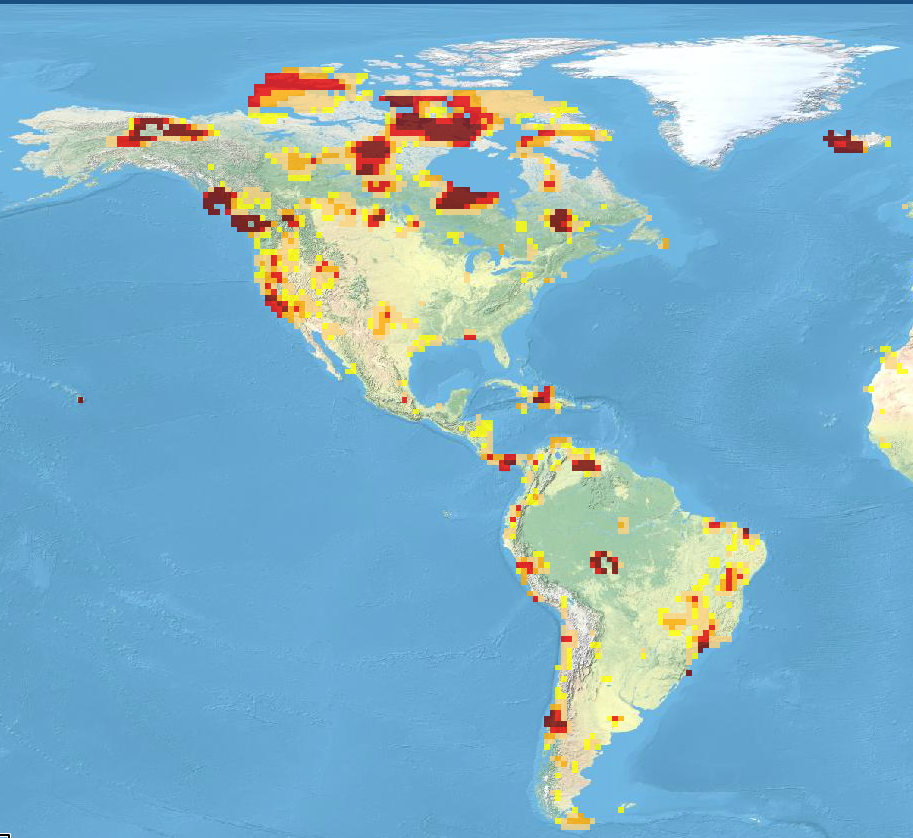 Due to drought there are significant challenges on almost every continent.

North America, is experiencing ongoing drought in the West and Midwest at this time. There is growing concern over winter wheat and also spring planting. In California the situation has marginally improved with rain and snow, but not enough. Brazil has had some improvement in precipitation, but some areas are still short. Whether drought develops in the Amazon Basin remains to be seen.

Russia is already forecasting a dire fire season in Siberia, which will produce higher levels of CO2, soot and CH4 through the summer. Australia and Southeast Asia are already warning of deeper drought and fires.

The one week forecast sees ongoing dryness in some areas of Central Africa, while the Philippines gets hit with a tropical cyclone. Some areas of Indonesia continue to experience increasing dryness which will increase its drought severity, resulting in crop challenges and more forest fires. 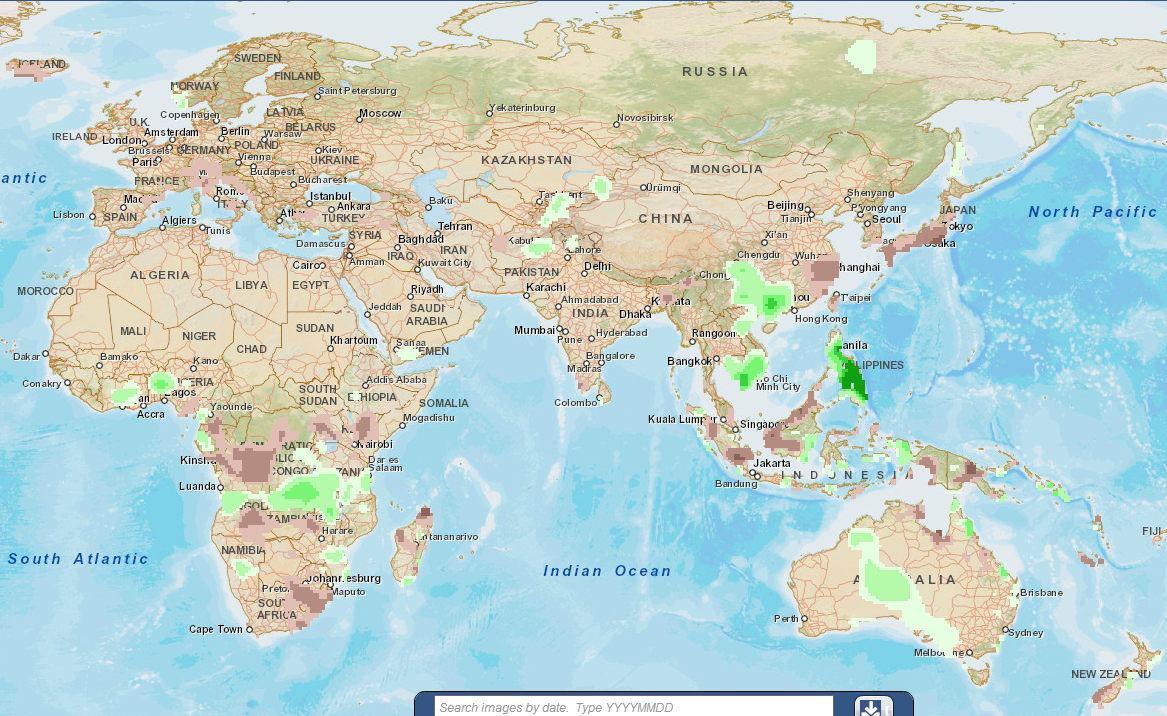 Euro-African-Asian 2 week forecast depicts the developing and deepening drought across Indonesia as El Nino characteristics increase in the equatorial Pacific. Southern Africa will begin to experience more dryness, and the rains in East Africa begin to potentially reflect the El Nino development in the Pacific. 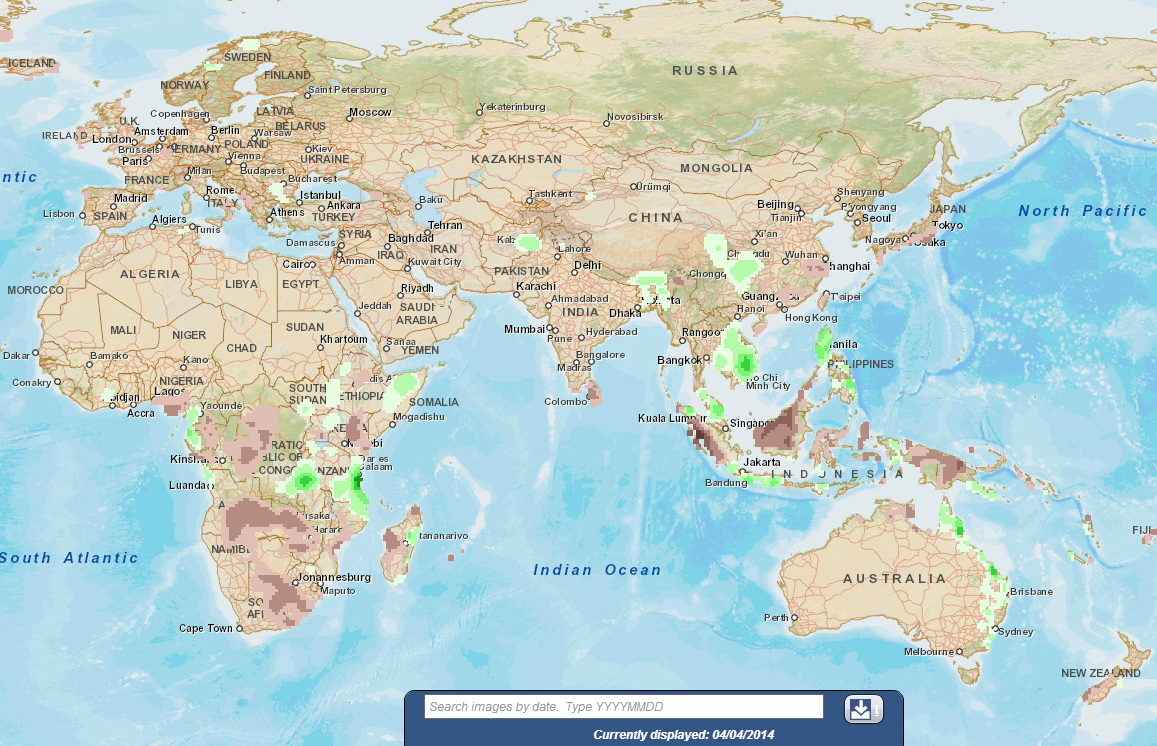 The precipitation forecast reveals increasing dryness in the US Midwest, which may impact the choices farmers make between planting soy versus corn this season. Of even more concern is the forecasted deepening drought in South America, especially Brazil and across the Amazon basin. Argentina will get some much needed rain. 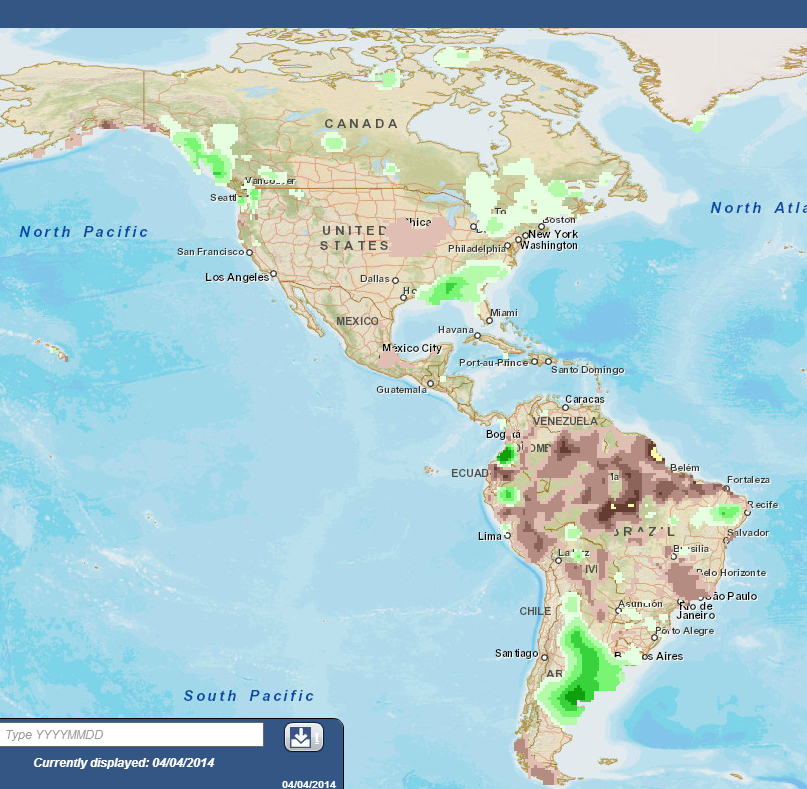 The week's forecast calls for greater warmth in the U.S. West. "The highest temperatures of the spring thus far are expected next week across the West, with some locations experiencing their first day of the year above 90 degrees.

Unfortunately, this will likely lead to worsening drought conditions across California, where some reservoirs are already at near record-low levels."
See: http://www.accuweather.com/en/weather-news/warmth-builds-in-the-west-next/25282691
The 2 week America's forecast sees further rainfall in the US Northwest, Southeast and more precipitation shortfall in the Brazilian Amazon, which is of concern for forest fires, crop irrigation and river navigation if it persists with the coming El Nino. 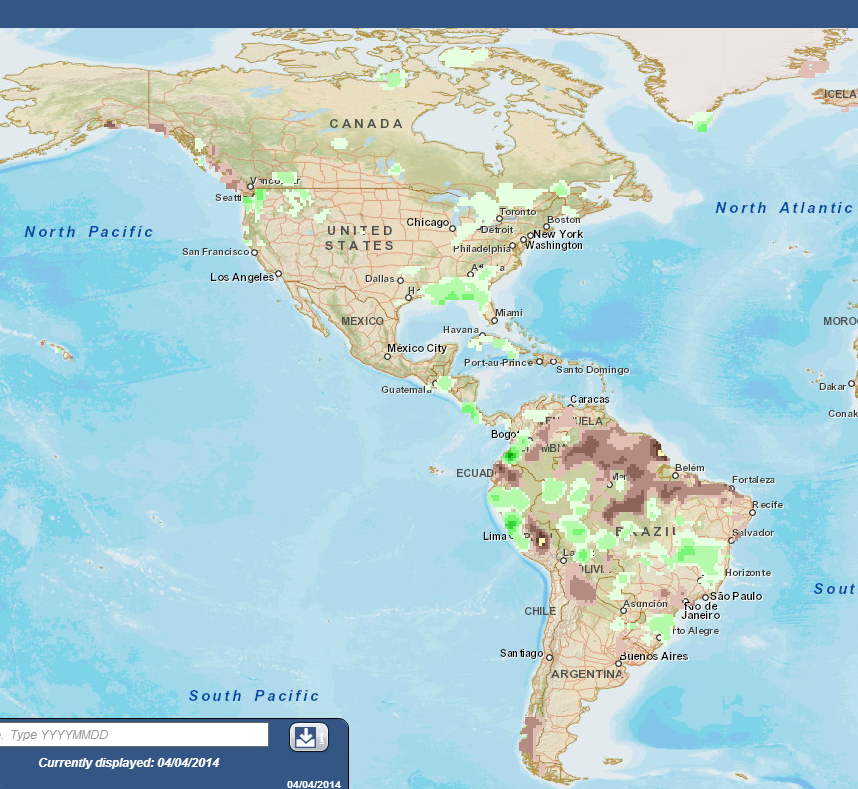 More later on potential El Nino Impacts and the crazy Russian/Siberian weather of this winter.

Posted by Apocalypse4Real at 10:35 AM