NOAA ESRL issued its December, 2016 Global CO2 report on March 5th. It supplied another sobering benchmark to those coming in rapid succession during the last three years. 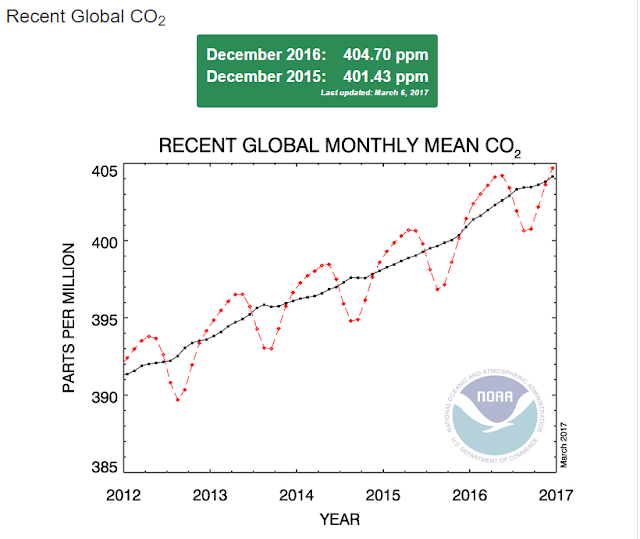 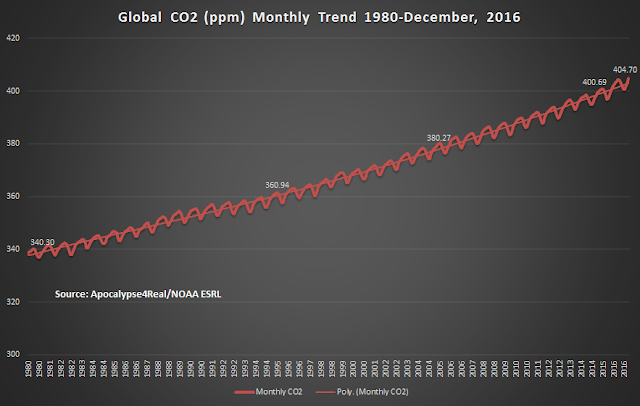 This is the 12th consecutive month with global CO2 year to year monthly increases above 3 ppm, which is unprecedented since Keeling began measuring CO2 at Mauna Loa, Hawaii in March, 1958. 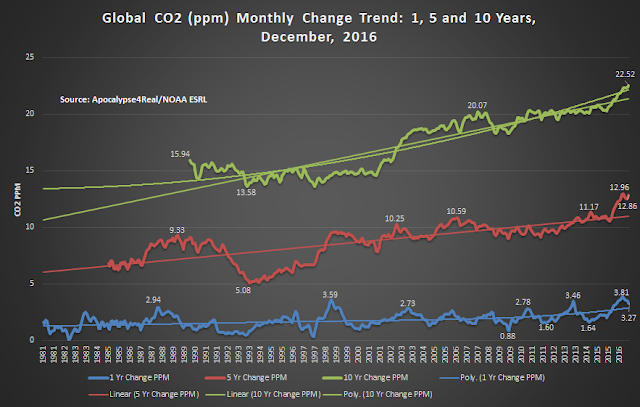 The year to year monthly increases continue to accelerate as the trend line above indicates. What is most troubling is that this growth is not following a linear trend but a polynomial increase through time.

December, 2016 saw a five year increase in monthly CO2 of 12.86 ppm over December, 2011. This is only slightly below the 12.96 ppm five year change recorded in August, 2016. December is the 10th consecutive month of five year CO2 increases above 12 ppm, another unprecedented rise in global CO2, and far above its accelerating trend line. We have not experienced a five year monthly increase below 10 ppm since March, 2013, and it is unlikely we ever will again.

The December, 2016 CO2 concentration is 22.52 ppm higher than December, 2006. This is another all time record increase, and the 6th consecutive month with an increase above 22 ppm. We have not experienced a 10 year monthly increase below 20 ppm since October, 2012, and it is very doubtful we ever will again.

According to NOAA ESRL, the annual mean 2016 global carbon dioxide growth rate is anticipated to be 3.16 ppm over 2015. Given their methodology is based on the average of December and January of the next year (2017), this seems conservative. If the December, 2016 monthly increase is 3.27 ppm, then this seems based upon an expectation that January's increase will be well under 3 ppm to meet the preliminary growth rate. Time will tell.

However, if one uses the average of monthly increases of CO2 for 2016, then the annual increase for 2016 is 3.47 ppm over 2015. It seems more likely that the NOAA ESRL annual change will move higher once the January data is available. 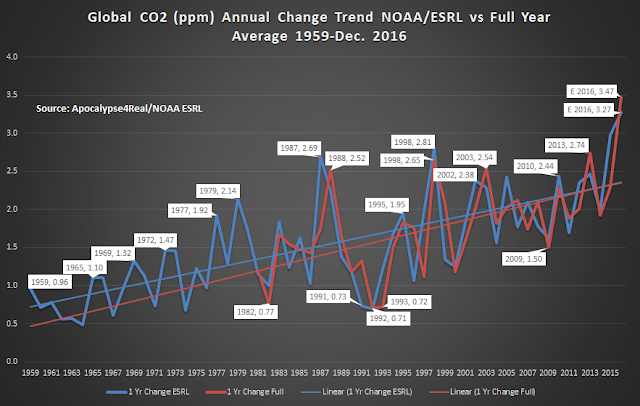 With the final adjustments to the annual change, it can be anticipated that 2016 will be the first year that the NOAA ESRL global CO2 concentration will experience an annual increase of more than 3 ppm. This is not good news for our world.

According to the Global Carbon Project, human global CO2 emissions practically flat-lined for 2013-2016. Source for the following: http://cdiac.ornl.gov/GCP/carbonbudget/2016/ 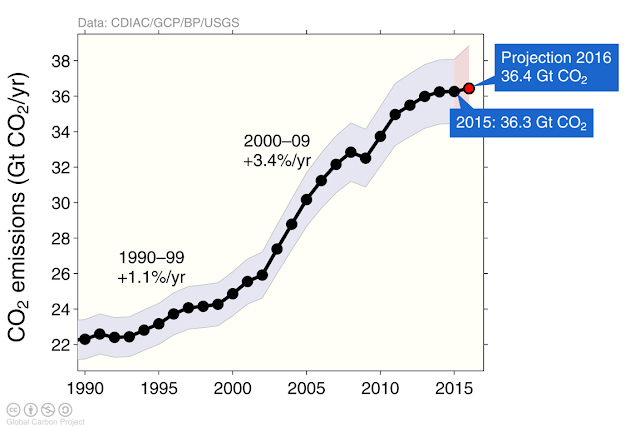 Yet, we experienced continued high CO2 concentration increases during these years.

The GCP position is that these concentration increases are due to declines in CO2 sink effectiveness, caused by drought and higher temperatures. These CO2 increases hold us closer to the RCP 8.5 scenario, where it is perilous for humanity to tread. 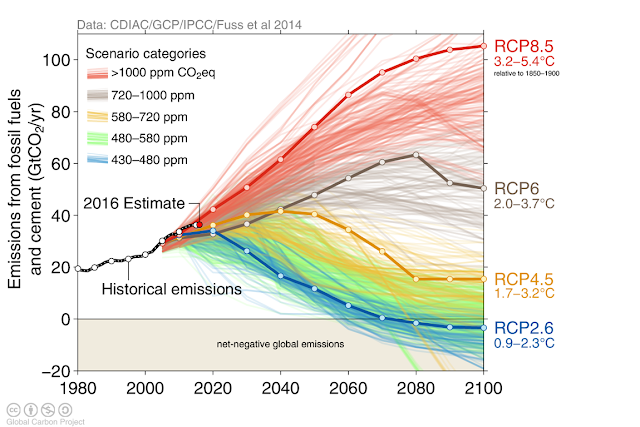 As Peter Tans commented in regard to the record 2016 Mauna Loa CO2 concentration announcement, “The rate of CO2 growth over the last decade is 100 to 200 times faster than what the Earth experienced during the transition from the last Ice Age,” Tans said. “This is a real shock to the atmosphere.”
Source: http://www.noaa.gov/news/carbon-dioxide-levels-rose-at-record-pace-for-2nd-straight-year

If true for Mauna Loa's CO2 data, how much more a real concern for the entire planet.
Posted by Apocalypse4Real at 12:49 PM