Despite the intense focus, the United States is not the only country experiencing major drought, and other situations are even more dire - but receiving less attention in the US media.

What follows is a synopsis of global drought conditions and their impacts by time period and region, and then an implication summary.

To start off, here is the precipitation anomalies globally for January 2014 from the Columbia University/ NCDC CAMS.

What is noticeable is the drought in Australia, China, Brazil, Europe/Russia, and Turkey in addition to the US. These areas are highlighted in the Global Climate Portal Imagery that follows by region that follows below and we will look at drought severity by hemisphere. 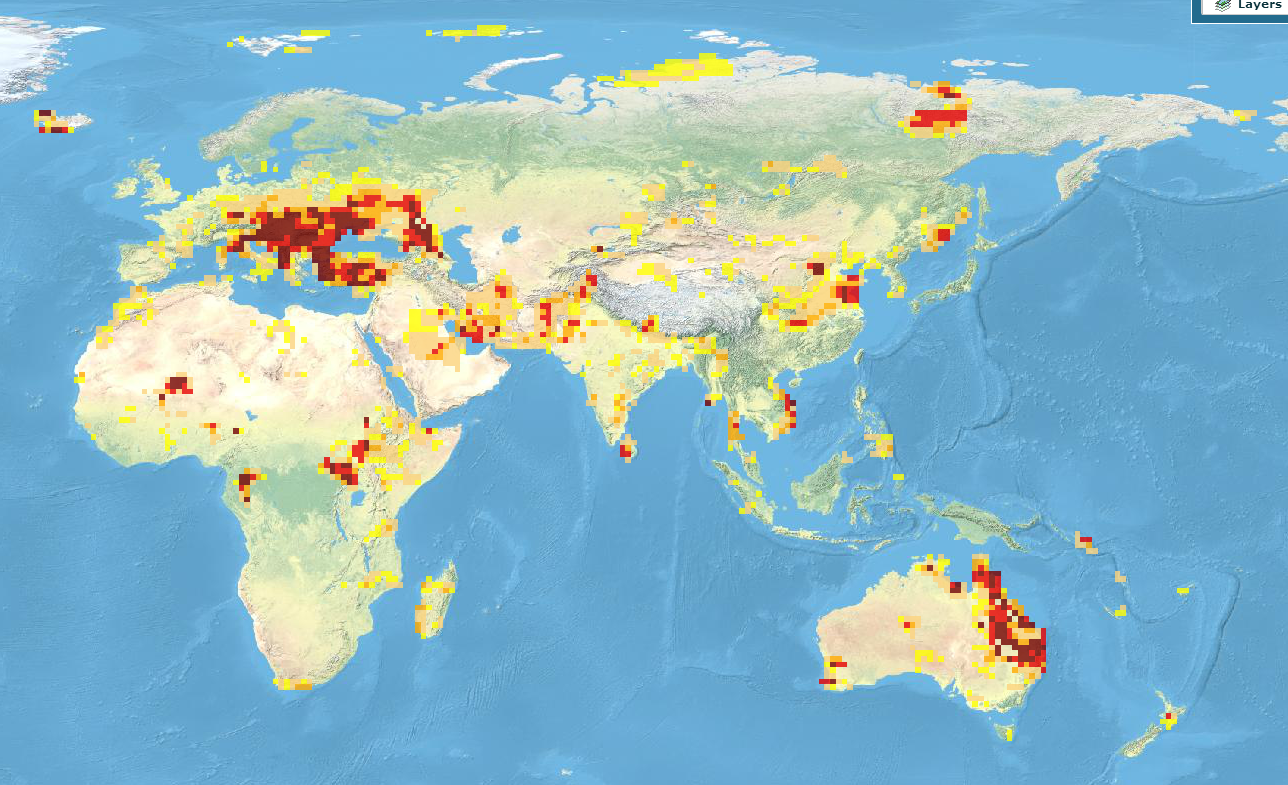 January, 2014 saw precipitation shortfalls across wide areas of Eastern Europe and portions of the Middle East. While the focus in the Ukraine, for example has been on the protests, it is the lack of precipitation that may have a major impact on winter wheat production and spring planting. Turkey has also experienced sever drought last month.

Portions of Iran and Pakistan and India, which also grow winter wheat, are experiencing crop stress due to dryness. Australia has experienced major heatwaves and resulting drought that are devastating their cattle production capacity in Eastern Australia. China has experienced dryness as well, that if it continues may have a detrimental impact on wheat production Hints of dryness and drought appear in Southeast Asia, such as Thailand and Vietnam, which are also creating water security stress. 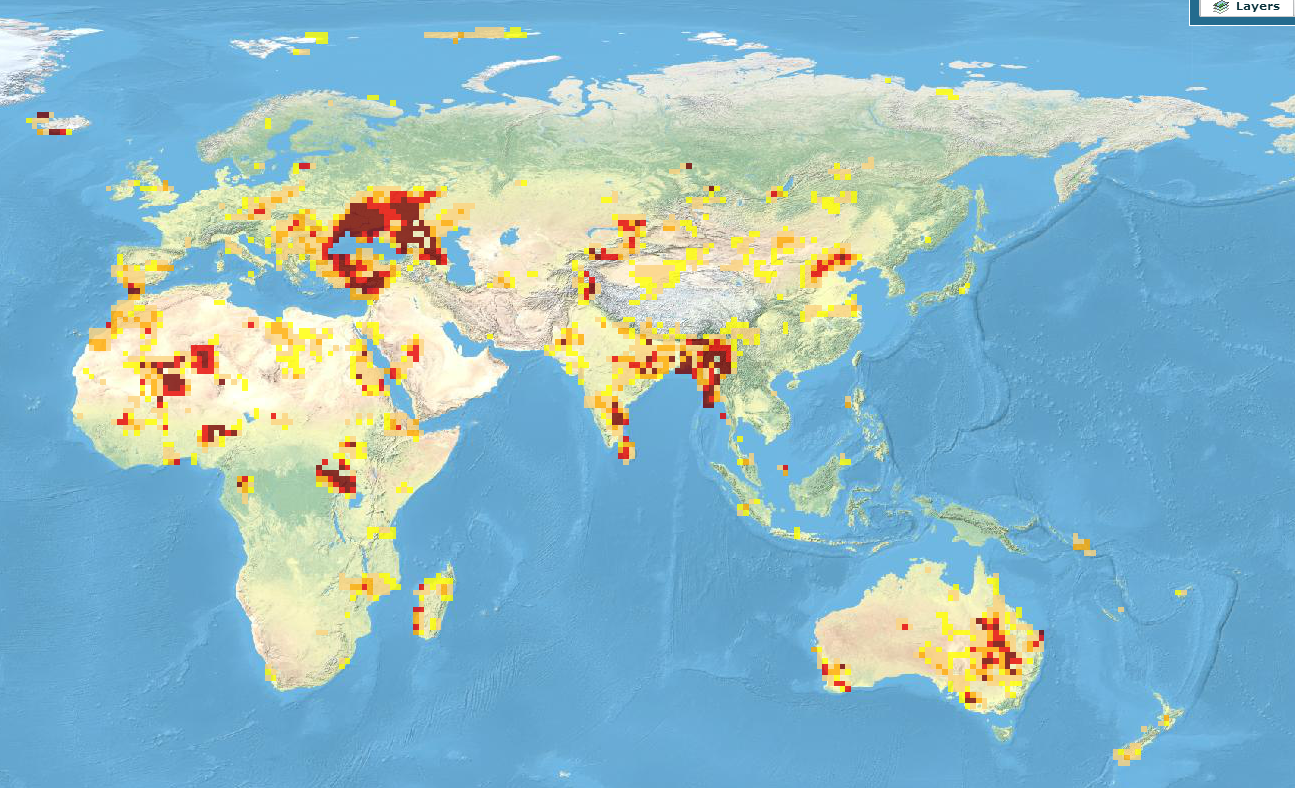 Looking back 60 days of drought impact similar areas have precipitation shortfall, which makes it apparent that the droughts have been more than just a brief impact, especially for Southeastern Europe, Russia and Turkey. India, Bangladesh and Myanmar along with Australia have been living with longer term impacts. 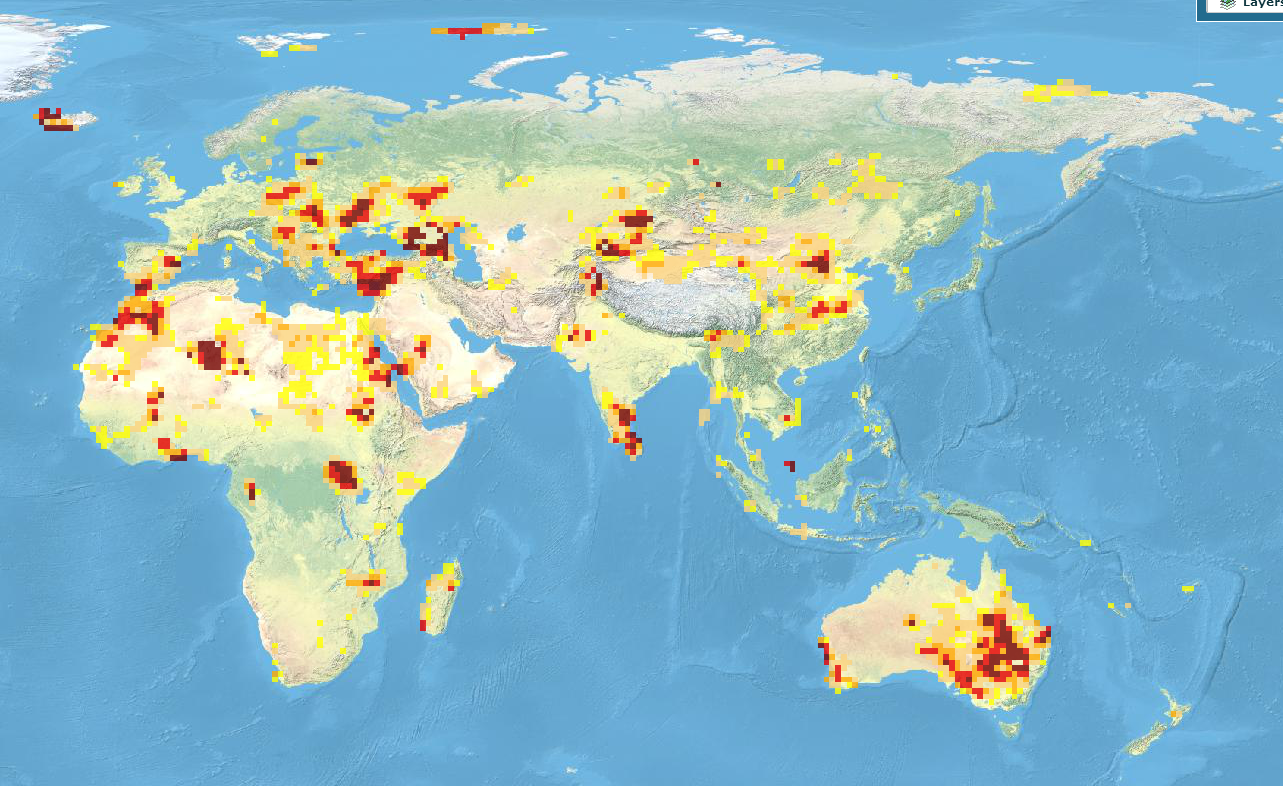 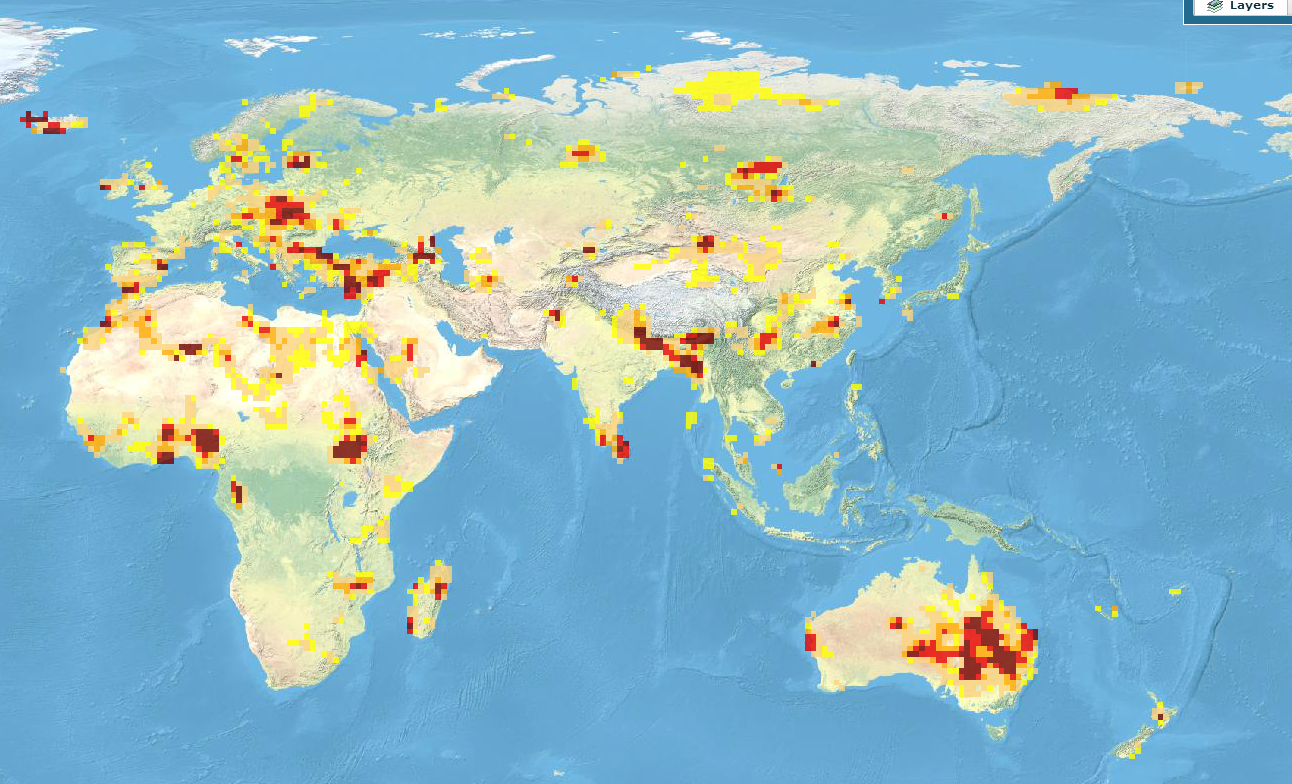 When one considers the last six months of precipitation, the lack of precipitation and the severity of the length of the current drought is more sobering. Eastern Australia's fires even during their spring have their roots in the dryness of the last 6  months, as do the problems in Europe and Turkey. Areas of China also reveal the length of dryness in rice production areas. 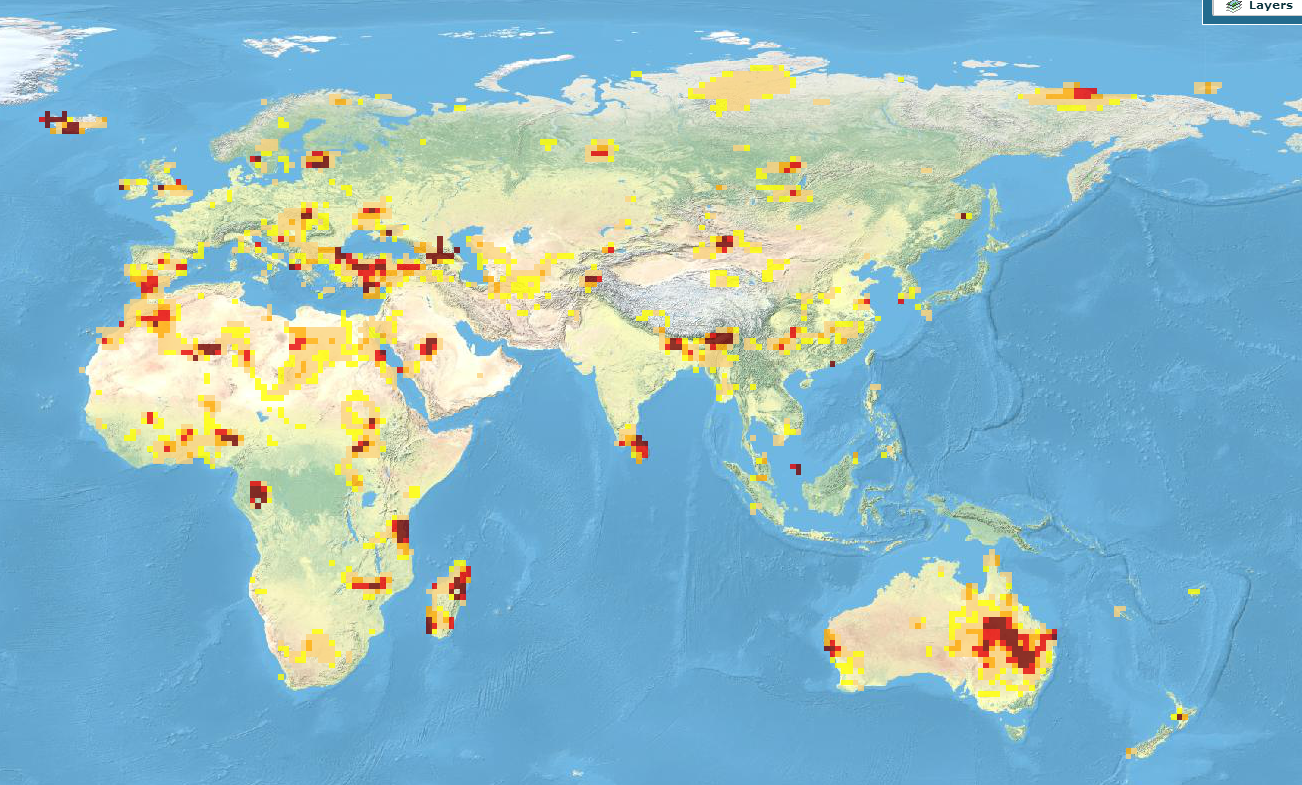 The drought perspective of the last nine months is a further depiction of the entrenched drought cycles in Australia, across northern Africa, in southern China, which has not recovered since early last year. 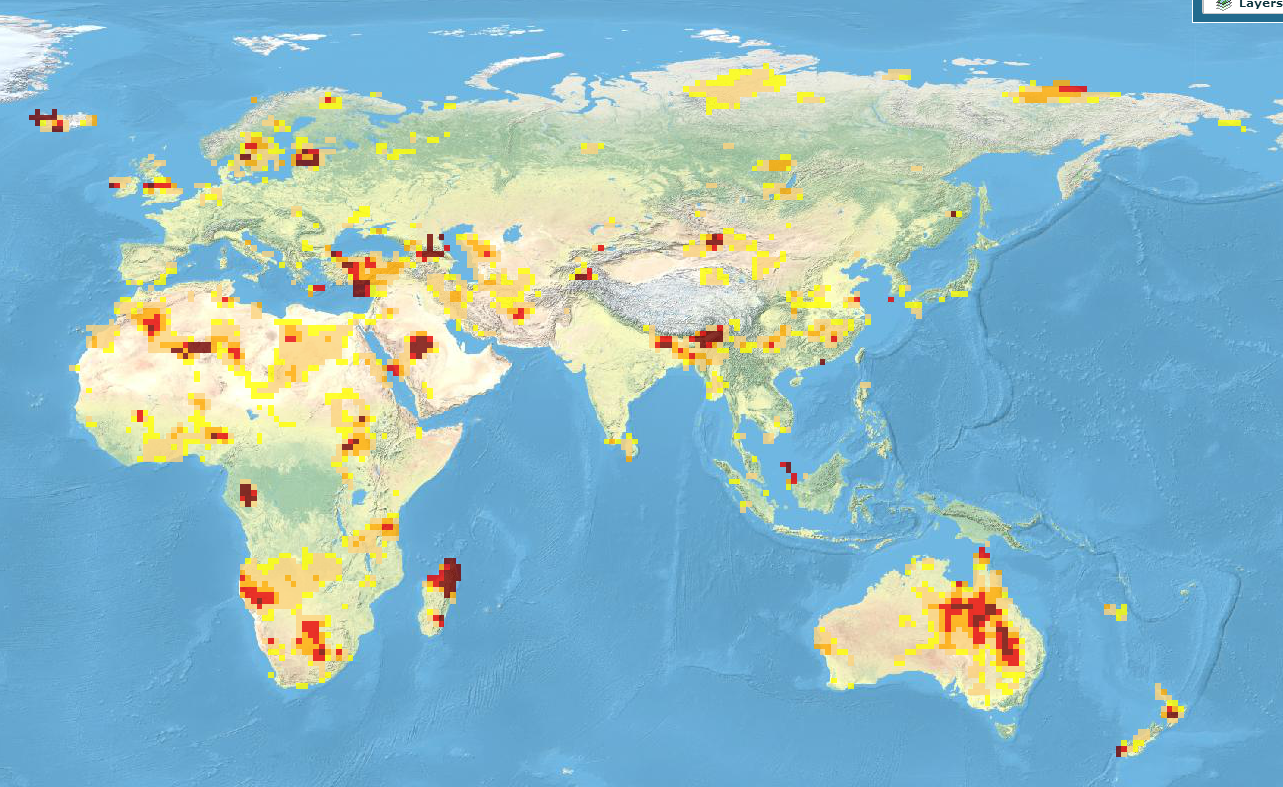 The year long perspective shows the ongoing dryness in Australia's east, in China and across Africa. Namibia has been terribly dry and it has destroyed its local agricultural economy. Zimbabwe has suffered as well, with it not being able to grow enough wheat or corn to feed its population,. Areas of northern Europe finally reflect its year-long shortfall of rain and snow as well. 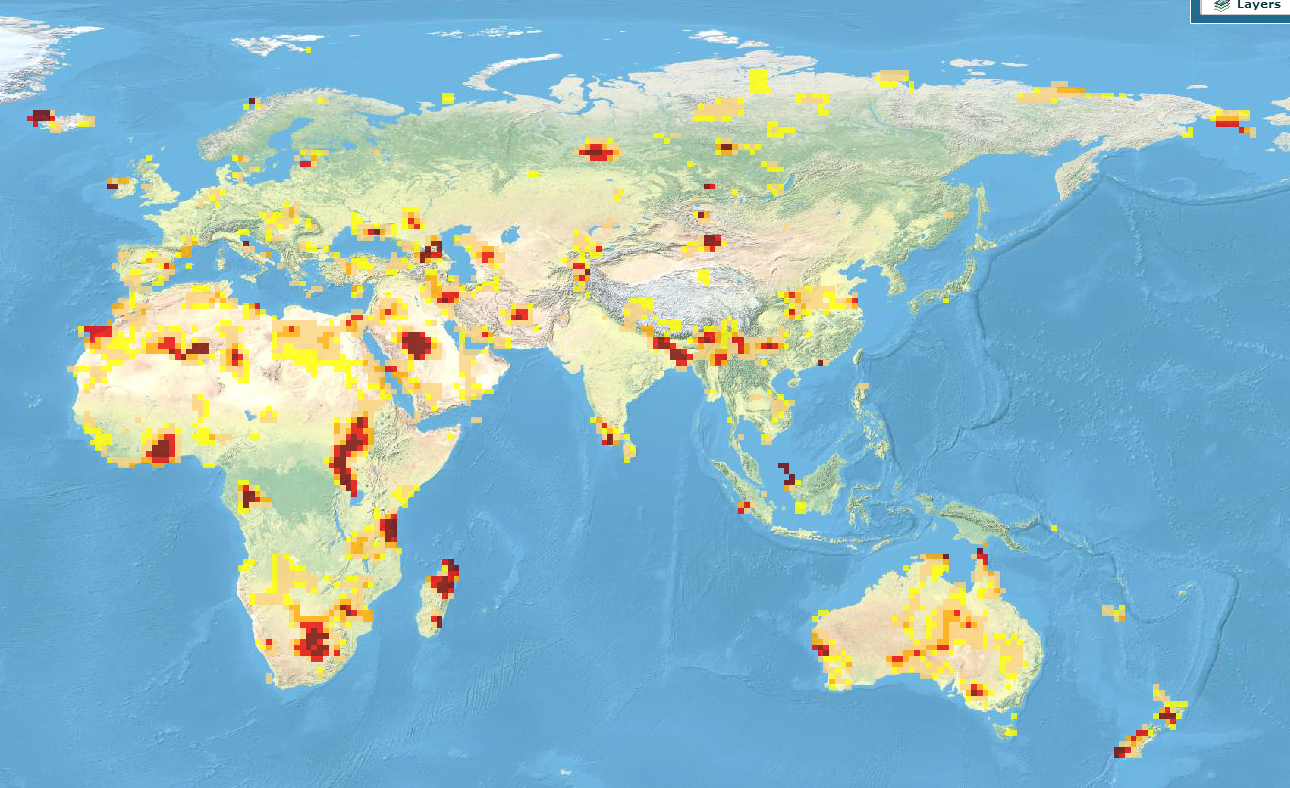 A two-year long view reveals the facts that even though many areas of Africa, Asia and Australia have received rain in the shorter periods, they are still in long term drought. For example, most of the Nile River valley has not recovered to normal precipitation over the last two years, similarly with southern Africa. Areas of Southeast Asia also remain in long term precipitation deficits, challenging the Mekong as a water source for agriculture and transport. The recent media reports from some of these areas vividly describe these situations.

In Africa, portions of Zimbabwe were on the verge of starvation, however the global community only donated $4 million of $60 million needed to cover the crop shortfall.

"Sory Ouane, the head of WFP in Zimbabwe, said that despite contributions from donors such as the United States, Britain, Japan and the U.N.'s Central Emergency Relief Fund, the need for funding remains desperate.
"It is a huge deficit that we are facing in the country, because we had planned for this program $86 million.  So far we have only managed to raise half of this ...  But no aid [contribution] is small at all -- this $4.2 million by the Japanese government is an important relief for us," Ouane noted." See: http://www.voanews.com/content/reu-wfp-struggling-to-avert-starvation-in-zimbabwe/1841902.html

Australia is facing the ruin of its cattle operations in the East, "The Australian government will provide a A$320 million ($289 million) assistance package to help farmers ravaged by years of drought across the east coast, Australian Prime Minister Tony Abbott said on Wednesday.


"With pockets of Queensland and New South Wales recording the lowest ever rainfall levels, farmers in the world's third-biggest beef exporter have been forced to slaughter starving cows at record rates, pushing prices to lows, and adding political pressure for federal assistance."
See: http://www.agprofessional.com/news/Australia-commits-nearly-300-million-to-help-drought-hit-farmers-247266181.html

In Australia, "An area larger than France and Germany combined has been classified as drought-stricken by the government.

"It has now been more than 40 days since the city recorded more than 1 mm (0.04 of an inch), making it one of the longest stretches for dry weather in the recorded history of the city.

"For more perspective on the severity of the drought, Singapore has reported less than 75 mm (3 inches) of rain since Jan. 1, which is less than 20 percent of the normal 404 mm (15.92 inches) that falls through Feb. 24.
"The drought has begun to impact agriculture across both Malaysia and Thailand, including the crops of rice and rubber.
'Drinking water shortages have also become a concern and could result in hundreds of thousands of people seeing their water supplies run dry in the coming weeks if rain does not return." See: http://www.accuweather.com/en/weather-news/drought-worsens-in-malaysia-an/23698698
Kuala Lumpur has also begin water rationing and the concern over forest fires is increasing across the region. See: http://www.bloomberg.com/news/2014-02-25/water-rationing-begins-outside-malaysia-s-capital-amid-drought.html

Turkey's drought is affecting farming and also the water supply for Istanbul, with little relief in sight. The country may be facing a significant need to import grain this summer.

"Water levels in dams and humidity levels have dropped to alarming levels, with the temperature across Turkey hovering around 10 degrees Celsius above the average and rain and snowfall levels remaining far below seasonal averages.

The persistence of the drought could slash fruit and vegetable production by a quarter and increase prices at least 20 percent, the head of the Turkish Agriculturists’ Association (TZD) has warned." See: http://www.hurriyetdailynews.com/drought-fuels-fears-over-energy-costs-food-price-rises.aspx?pageID=238&nID=62877&NewsCatID=344

Even more worrying for the Turkish government is the fact that major reservoirs are beginning to run dry - when they should be filling for the summer.

"Istanbul, Turkey’s largest city, faces a serious threat of drought with water reserve being sufficient for only 100 days due to lack of rain and snow, according to a senior water expert on Wednesday.


“Having only 100 days of water reserve means that very tight measures should be taken,” Tugba Maden, a water expert in the Center for Middle Eastern Strategic Studies, told Xinhua in a phone interview.  With a population of 14 million, Istanbul tries to obtain the city’s needs of water from 10 dams built in the Marmara and the Black Sea regions.
Water levels in these dams have been decreased to the lowest point in six years with 35% in total. Three dams have already run short of water." See: http://www.neurope.eu/article/istanbul-faces-serious-drought-threat 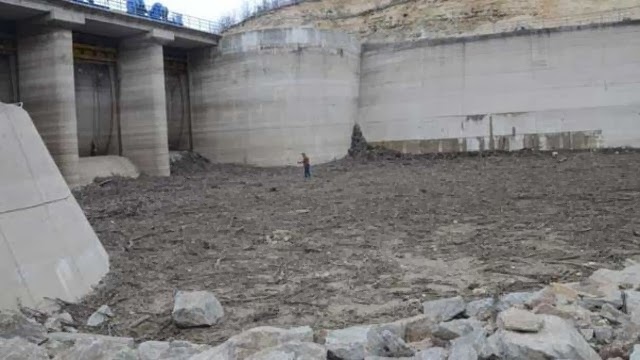 Source: http://www.worldbulletin.net/turkey/129523/istanbul-faces-drought-as-reservoir-dries-up
The Turks are not alone, With the Turkish need to hold water, the Tigris and Euphrates rivers are not  supplying Iraq with needed water for irrigation or drinking supply.
Implications:
These drought shortfalls - especially in Australia and Southeast Asia are anticipated to worsen as El Nino take effect. The impacts in Europe wait to be seen, however the potential threat of drought, crop shortfalls and potential food inflation do not bode well for the Middle East, Turkey, the Ukraine and potentially - Russia.

The impacts may be a drop in methane release as agricutural activity slows, but the resulting fires in Indonesia, Southeast Asia, and Africa are adding CO2 and methane into the atmosphere.

Posted by Apocalypse4Real at 5:45 PM