US Methane Release Under Reported by EPA

On November 25, 2013, a paper published in the Proceeding of the National Academy of Sciences reported that the EPA was underestimating the amount of CH4 released annually in the US by approximately 50%. See: Anthropogenic Emissions of Methane in the United States,  http://www.pnas.org/content/early/2013/11/20/1314392110.abstract


The study, based upon 2007-2008 methane emissions, concluded that fossil fuel extraction and refining, plus cattle farming were the major under-reported contributors. It estimated that 50-70% more CH4 entered the atmosphere annually than being presumed by the US EPA. The greatest divergence in the reported vs new estimate was in the South Central United States - Texas, Oklahoma, and Kansas.

According to Tom Revell's article Anna Michalak, a co-author of the study said, “Something is very much off in the inventories.”... “The total US impact on the world’s energy budget is different than we thought, and it’s worse.”

As the study is based on CH4 emissions readings from 2007-2008, these revised figures do not reflect the impact that the fracking boom may have also had on methane emissions.
See: http://blueandgreentomorrow.com/2013/11/27/study-says-us-emitting-more-methane-than-government-estimates/

This week another paper, which reviewed 200 papers on US methane totals and sources of release, substantiated these conclusions, that the EPA estimates of annual methane release were approximately 50% too low.

Much of this higher estimate is attributed to the US natural gas boom, with most problems concentrated at a few emission points. 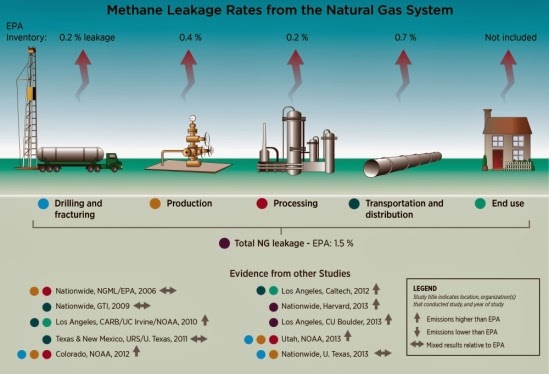 "Eric Kort attributed the higher amount of released methane, in part, to a very small number of faulty vessels holding natural gas, which can allow significant amounts of methane to leak out into the atmosphere. Kort referred to these leaks as “super-emitters.”


"According to one study of natural gas components, “A fraction much smaller than 1 percent is responsible for more than half of the emissions,” Kort said. “You know when you look at these individual studies that a kind of super-emitter problem exists, where a small fraction of sources are responsible for a large amount of the emissions.”" "See: http://www.michigandaily.com/news/new-study-shows-higher-methane-emissions
As Kort commented, “We’re trying to improve our ability now to use different space and airborne observations to identify regions where emissions are larger than accounted for to identify what source is the cause for that — if it’s coming from cows or oils or gas.” See: http://www.michigandaily.com/news/new-study-shows-higher-methane-emissions
This last comment leads to an example of what space-based CH4 monitoring can tell us about US emissions trends.
What is revealed are the major annual increases in CH4 ppb releases in the Southwest and Central US during 2008-2013.The AIRSv6 0-4 km CH4 annual increases correlate with areas substantially associated with the natural gas and oil or cattle production discussed in the articles. Another source for the annual ppb increases may be forest fires in the US West, and tree kills due too pine beetle infestation. The 2012 drought may have also had an impact. 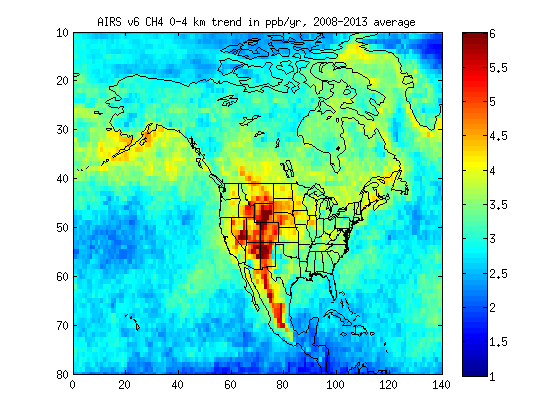 However when the US ppb/yr increases are compared to global annual CH4 ppb trends, it  reveals that Australia, South Africa and Asia/China had higher rates of increase, perhaps due to a mix of drought, flooding and increasing pollution rates in China. 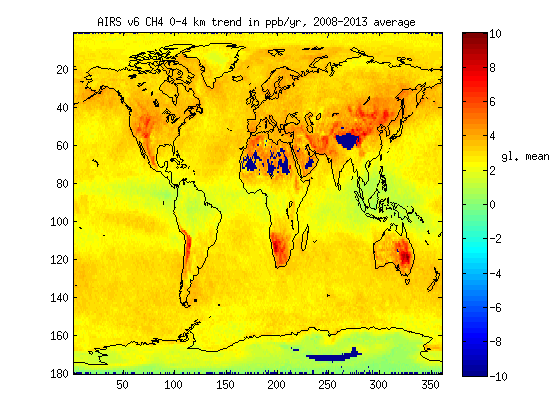